“Everyone is psychic; it's just a matter of tapping in to one's own intuition.”
― Margie Kay 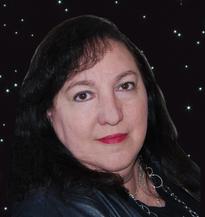 Margie Kay is a Paranormal and UFO Investigator, Remote Viewer, and author. She is clairsentient (feels), clairaudient (hears), clairvoyant (sees), and does remote viewing. She owns a construction company, a forensic investigation company, and is the publisher of Un-X News Magazine. Kay hosted Un-X News Radio Show for several years where she interviewed international researchers and authors, and is now a popular radio show guest.

Margie has become extremely proficient at seeing inside the body, which she calls a "P-Scan," (psychic scan). She does intuitive medical diagnosis and is able to see inflammation, infection, disease, missing organs (from surgery), broken bones, implants, and more; even on a microscopic level. Due to time constraints, she does not do many private readings but does do talks and demonstrations for large groups and conventions, where she always amazes the audience with her abilities. Note: Margie is not a trained health professional. This is for entertainment only.

Kay uses her natural remote viewing (RV) abilities to assist law enforcement, private investigators, and private individuals. She does not use CRV (Controlled Remove Viewing) as most others do that work in this field, having become proficient using her own methods. Margie has been instrumental in solving over 50 missing person, homicide, and theft cases using her unique remote viewing abilities, which she has honed over the years with amazing results. She has also worked as a private undercover investigator for the Kansas Bureau of Investigation (KBI), where she learned some of the "normal" tricks of the trade.

Kay is the author of Gateway to the Dead: A Ghost Hunter's Field Guide; Haunted Independence, Missouri; A Sonoma County Phenomenon; The Kansas City UFO Flaps; Mysterious Missouri; and other books on various topics. She is working on a film documentary and more books. Future titles will include such topics as law enforcement and psychics, and her autobiography.  Margie is the owner of Un-X Media Publishing and publishes her own books and books for others.

Margie is the Director of Quest Paranormal Investigation Group and is the Assistant State Director for Missouri MUFON. She has conducted over 1,100 paranormal and UFO investigations.  Margie uses standard scientific investigation methods and equipment for research, and relies on remote viewing to clarify what may have occurred.

Margie is also a UFO/ET experiencer and has had her own close encounters with UFOs and Extraterrestrials, which will be published soon in a new book.

Margie Kay has appeared on numerous radio programs including Jeff Rense, Jimmy Church, Tracie Austin, Alejandro Rojas, Joe Montaldo, Race Hobbs, Gil Wilson, and more. She has appeared on KMOX, WDAF, KCTV 5, Fox 4, and CNN. Margie was the subject of the episode "UFO Hot Spots" in the Hangar 1 television show which covered her investigations in the Blue Springs Lights and an animal mutilation case in Missouri, appeared on Ancient Aliens, and was in the pilot episode of the TV show, Strange.